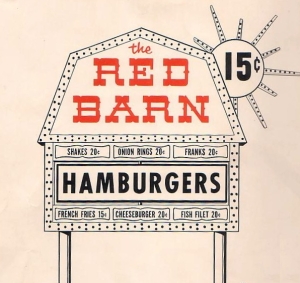 Eating out was a rare treat when I was growing up in the Sixties. There were no McDonalds, with their Happy Meals and Playlands near Highland Park. Yes, I survived the first sixteen years of my life without entering the door of a McDonalds.

My Mom was a stay at home mother who dedicated her life to taking care of her children. She made sure that I had dinner each night.  There was always a meat, vegetables and a dessert of some kind. Occasionally she would treat us with a pizza that she made from the  Chef Boy-ar-dee@ pizza mix. For this reason, I never remember eating a take away pizza while I was growing up.  I always thought it would be nice to try the pizza from Lido’s on Six Mile Rd, but I don’t remember ever tasting a take away pizza while I lived in Highland Park.

One of the first words that came out of my mouth was Kow-Kow.  Whenever we would pass the Kow-Kow Inn on Six Mile, I would cry out the words, Kow-Kow with great excitement!  My first remembrance of eating Kow-Kow Inn food was not in the restaurant, but the little white boxes that found their way into our home.  Our meal of choice was Chicken Chop Suey. Only later, when I was out of high school would I visit Kow-Kow. The decor wasn’t fancy, but it made you feel like you were in an authentic Chinese restaurant. The two complete meals for eight dollars was a delicious bargain.

The Kow-Kow Inn is no longer in business. A special thanks to Charles Powell for the photo.

My first fast food experience, like most Highland Parkers, was the Red Barn on Grand Avenue and Woodward.  We went there a few times when it first opened. My Mom probably liked the fact that she was able to get out of the kitchen.  We would order our meal and then take our treasure out to the car and eat the food in the car.  I would eat and look at the Granwood Hotel sign advertising rooms for four dollars.  I also looked at the WMUZ sign on the side of the Grand Bible and Book store.  We ate in the car because, in the beginning, the Red Barn only had only few places to sit. The seating consisted of what looked like white school desks facing the order counter.

The food at the Red Barn was not health food. Their hot dogs were in toasted buttered buns. To this day, there is no hot dog like the Red Barn’s.  I don’t know why a fast food franchise doesn’t try to sell this type of hot dog today. As for the fries, they were stringy and had no real taste. We would wash down this gourmet meal with a small carton of white milk. Mom never allowed us to order pop. After my early childhood years, I would walk pass Red Barn on the way home from high school, but I never ate there again for some unknown reason.

As the novelty of the Red Barn wore off, Mom took us to a more upscale restaurant called The Clock. This was a real sit down restaurant with a menu. The most fascinating thing about The Clock was that each booth had a its own little Jukebox. Mom would let us a pick out a song or two to have played at our table while we waited for our food.

As a child, I never experienced eating the chili dogs at Red Hots.  My Dad had his own favorite coney island restaurant which was the Nevada Grill. This was on John R off of Nevada in Detroit. I don’t remember much about this place, but Dad was sold on it.

When I became an older teen, I began to venture out on my own to eat out occasionally.  My favorite place was Red Hots.  I would order two chili dogs and a Vernors that would come out of a machine. There was nothing to compare with this great combination. When I took my wife there a couple of years ago, she wasn’t impressed, but the chili dogs tasted just the same. Unfortunately, the Vernors came in a can.  It didn’t have the same taste.

There were a few other experiences of eating out in Highland Park. When I was in elementary school, one of my friend’s mother took several of us to Howard Johnson for his birthday party.  This seemed rather excessive, but I enjoyed the novelty of eating at Howard Johnson. As a family, we never ate there because Dad didn’t like it. Even to this day, I avoid Howard Johnson.

Though the Victor Bakery is not a restaurant, I remember that we would go there to buy fresh French Bread. This was my first experience with bread that had a hard crust and a soft dough inside. To this day, I still enjoy fresh baked French bread. 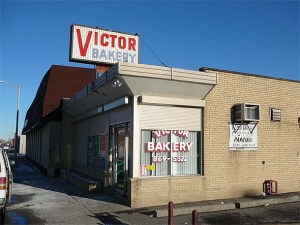 The Victor Bakery looks much the same as when I was growing up.

It is hard to believe that many people in my generation grew up without McDonalds and other fast food restaurants. However, I have no regrets. Eating out was a rare treat.  I am thankful for the effort my mother made to keep us fed by cooking delicious meals at home, but I will always remember the rare treat of eating out.

P.S. You can find all that you need to know about the Red Barn at: http://www.barnbuster.net

P.P.S. If you are interested, I also have another blog where I focus on spiritual subjects from a pastor’s perspective. http://www.markjemilbooth.com