Growing up and going to school, I basically lived in my own little world.  My focus was upon myself, sometimes family and a few friends. I never thought about the lives of the teachers that I had throughout my days in school. Teachers were like the furniture in the school. They were a necessary fixture. Yes, many were nice and a few not so nice.  However, I never really thought about them as people. I never thought about the fact that they had personal lives with heartaches, problems, sicknesses, and needs. I don’t think I ever said “thank you” or an encouraging word to any of my teachers.

Today I am typing this post because I had teachers that taught me how to read, and write.  Several teachers poured themselves into teaching me grammar and spelling. I had an eighth grade teacher that taught me how to type. My tenth grade speech teacher gave me my first lessons in public speaking.  Now, as a pastor, I preach the Word of God three times a week. There are many other things that I learned in school, that I use today. Yet, I rarely think about the teacher that taught me the very things that I know today.
I am sure that I am not alone in taking teachers for granted. Teachers are a group of people who are always giving out, but they don’t get much in return from those to whom they give so much. As a parent or a student, it would be great to give a word of encouragement to a teacher. You can be the source of refreshment to a teacher who may truly be thirsting for someone to care about them.
P.S. I originally wrote parts of this post after hearing that one of my teachers had committed suicide several years ago.  It woke me up to the fact that my teachers had real needs, but I was too self-centered to think about them as people.

Midland School, a few years ago. It is now torn down. Try to imagine what it looked like new!

It was early September 1961, the summer was past. I would now begin a new stage of my life called elementary school. This five-year adventure would take place at the newly built Midland Elementary School.  The school looked very modern compared to Ford School where I had gone to kindergarten.  There would be no meandering hallways. There would be no buying milk in what seemed like a dungeon.

The school building had two floors. The upper floor contained all the classrooms except for the kindergarten classes which were on the ground level. The ground level contained the combination gymnasium, lunchroom and auditorium.  Also the ground level had the school offices and the teachers’ lounge. Everything in the building was fresh, clean and new. This is where I would get all the basics of a good education!

My first grade teacher was Mrs. Thomas.  I can see her appearance in my mind’s eye, but there was no outstanding thing about her that I can bring to mind.  First grade introduced me to some new friends called Dick, Jane, Sally and a dog named Spot.  They would visit our class every day via a filmstrip presentation and in our reading books. I soon learned Dick and Jane liked to look a lot as well as run.  Slowly, but surely Dick, Jane, Sally and Spot were helping me to learn to read. 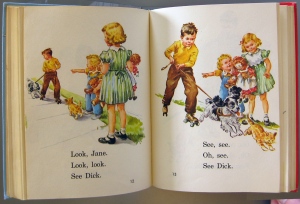 One of the new things about first grade was our gym class that we would have once or twice a week. This was a time of embarrassment for me because I still hadn’t learned how to tie my shoes.  I would have to ask a friend or Mrs. Thomas to tie my gym shoes. You may think I was a bit slow, but the excuse my family gave me is that they couldn’t show me how because I was left-handed.

Being left-handed would be a problem all throughout my elementary school years.  Not only was I slow to learn how to tie my shoes (I did learn by 2nd grade). The other problem was learning how to write.  We first learned how to print with rather thick pencils. As I would write, I found that my hand followed the pencil instead of vice versa for a right-handed person.  This caused a large pencil mark on the bottom side of my hand.  I never figured out a solution to this problem.  As a result, my printing and penmanship are terrible even even now.

Another new learning experience of first grade was lunch.  Kindergarten was only a half day so lunch was unnecessary.  Children who lived close to Midland school would go home for lunch, but my house was a long walk from school.  For some reason, I refused to take a lunch pail. Mom would kindly fix my lunch and place it in a brown sack.  My lunch usually consisted of celery sticks, a peanut butter sandwich (with just butter, no jam), an apple or on bad days a banana, and then a dessert such as a cookie or a Twinkie.

We would all go down to the lunch room, which was in the gym. Tables were set up and we would begin eating our food, or trading our food with others.  There were also adults  to supervise us because I am sure that we needed all the supervising that we could get. I can still remember that one of our supervisors was Mrs. Street, who tried to keep us fairly quiet and make us eat our lunch.

After lunch, we would be able to go outside and play.  The playground had all the usual equipment, such as a slide, a teeter-totter, and swings.  There was an open area in the far corner where I enjoyed playing Pump Pump Pull Away with others. We also played King of the Hill on a cement slab, as well as Tag.

First Grade also was my first introduction to the space program.  One morning, we went to the library where there was a black and white television set up on a very high stand. The lights were turned off and we saw John Glenn blast off in his Mercury capsule.  Later that day, we were treated to seeing him splashdown. Many of us wanted to be astronauts as a result of the early Mercury flights.

Around Christmas, we would also be herded to the library to watch a couple of short movies for Christmas, one including the birth of Jesus Christ. I was also exposed to my first sighting of a silver aluminum Christmas tree outside of the teachers’ lounge. This was a curiosity to me because there was a wheel that would turn around in front of light which would show the aluminum tree in different colors. This just didn’t seem right to me.  Why couldn’t they just have a real Christmas tree?

This is what the tree looked like at Midland School. By the way, if you are interested you can buy this tree on etsy.com for $450.00!

In first grade, I also learned a couple of new words; “room mother”.  A room mother would be called on to organize a special party or bring cookies on special occasions. One thing I could never understand is that the cookie of choice always seemed to be the Windmill cookie. My mom would become a room mother a couple of times during my stay at Midland.  I always thought that she was the prettiest room mother at Midland school.

Soon, June arrived.  First grade was over. My report card said that I had passed on to second grade.  There would be a whole summer of playing baseball, collecting baseball cards, and playing outside with my friends.  It would also mean attending some Detroit Tigers games. Summer would also mean going with my mom to Patton, Pennsylvania for a couple of weeks. This small town had all sorts of adventures for me.  However, September would soon return. Second grade, here I come. 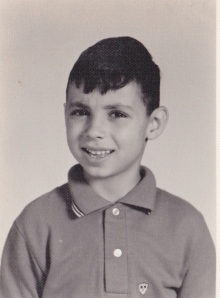 P.S. Please visit my other blog at: http://www.markjemilbooth.com.  I have several articles such as “God’s Waiting Room”, and “Moving Beyond Fear to Courage”.