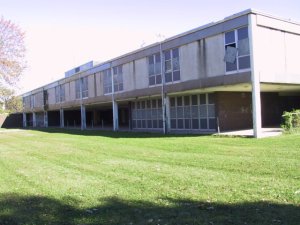 Midland School, a few years ago. It is now torn down.

How did I lose a whole year of my school life?  Out of all my years of schooling, my fourth grade experience is probably the one with the least memories. Perhaps, my fourth grade memories were erased by my first year of swim class (See my post: Facing My Greatest Fear: Swim Class). I would go to school every Tuesday with a great dread of the afternoon trip to the Liberty School swimming pool. Such a bad memory probably clouded many of the good experiences in fourth grade.

My fourth grade teacher was Mrs. Jung. I don’t remember a lot about Mrs. Jung except that she was middle-aged, and she wore glasses.  I also remember that Mrs. Jung was the most lenient teacher I had at Midland Elementary School. She allowed the class to have an abnormal amount of freedom. An example of this freedom was that she allowed us to place our desks in groups of four. Two desks would face two other desks. I don’t remember the point of this exercise, but looking back I could see that it was problematic.  Can you imagine the mischief we were able to do in such a setting? I don’t remember if this was a typical situation or a temporary experiment.

Speaking of desks, I had a full desk which had a top that lifted up. Inside the desk was where we were to place our books, folders and other essential educational materials. I often had a problem with my desk.  My top wouldn’t close!  This wasn’t because of a defect in my desk, but a big defect in my neatness.  I think I had the second messiest desk in the class. The person with the messiest desk will remain unnamed.

One of the highlights of fourth grade wasn’t in the school, but after school.  Fourth grade would be the first year that I participated in Highland Park Little League football.  I was on the Freshmen team. The practices were at 4:30 P.M. each night at Ford Field. This was great for me because I could walk to practice from my house on Candler Ave. Yes, I would have to cut through two yards to get there, but this was never problem in our neighborhood.

Being part of Little League football was my first experience in organized athletics.  Our coach was the Mayor’s son, Mark Storen Jr.  I guess I didn’t become a star because I was on the blue team, which was a nice way of saying the second string team. We played one set of downs each half and I played offensive guard.

One other memory that still sticks in my mind was the Christmas gift exchange for our class. I had bought a rather expensive gift to exchange. It was a plastic bowling set that cost almost two dollars. I was excited when I received my gift in a large Hudson’s box.  What could be in such a large box?  I opened the box and found a twenty-five cent rubber baseball. I felt quite disappointed. This showed that I had a long way to go in learning the joy of giving.

The rest of my fourth grade experience is quite a blur.  Yes, we had the usual recess.  The visits to the library. The same lunch that I always brought to school. The same walk home from school going through the dreaded Second Avenue tunnel.

I am sure that Mrs. Jung was a fine teacher and she taught me many important things, however, I don’t remember anything in particular that I learned in class.  I  am thankful that she did care for her students.  I am also thankful that I survived swim class!

5 thoughts on “My Fourth Grade Memories of Midland Elementary School”